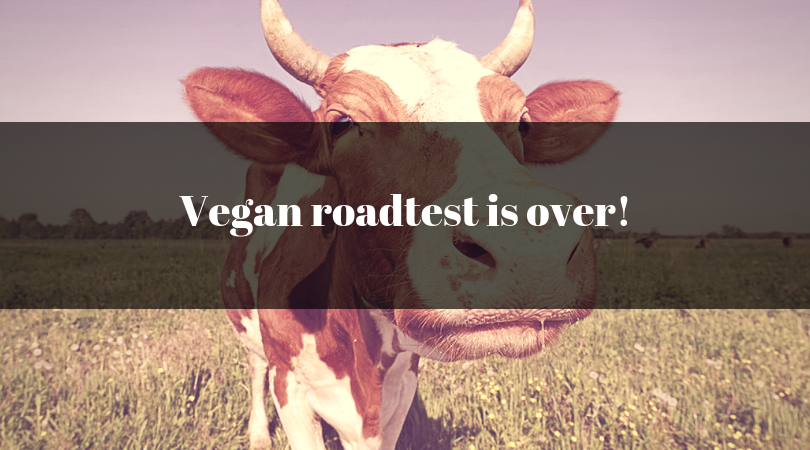 Diet Roadtest #4 – the Vegan edition – is now done and dusted, and I am not ashamed to say the haloumi and eggs I had for brunch on the weekend were potentially the greatest things that ever went in my mouth and graced my tastebuds.

At work today, one of colleagues even remarked how much happier I seemed … was I really that miserable for 7 weeks?!

Following a nutritionally balanced meal plan designed by my dietician, over the course of the roadtest I was able to reduce my total skinfolds by 10mm and, after an initial loss of muscle, I was able to gain a bit of muscle back and maintain it. Here’s the report:

What does the dietician say?

Ellena has provided a few points on the potential downfalls of vegan diets that she considered when creating my meal plans:

There’s also a few other things Ellen had to consider, like ensuring I was getting enough calcium and that it wasn’t competing with other nutrients for absorption. This is where it absolutely pays to have the help of a dietician!

Having a meal plan to follow definitely helped, rather than just trying to figure it out myself. In particular, ensuring I was getting enough protein – this is always a challenge for a vegan diet.

It also turned out that I simply wasn’t having enough protein anyway in my lunches each day, and I have upped my intake of vegetables significantly, which is always a good thing!

Being on a vegan diet also helped me to break my habit of raiding the lolly jar at work – given most of the lollies had animal products in them (eg, gelatin or milk solids), I simply couldn’t eat them so this was a nice side effect. The challenge now will be maintaining that!

What will I keep doing?

What won’t I keep doing?

Would I recommend it?

Honestly, it comes down to your own ethical viewpoint and what you’re trying to achieve. Living a vegan lifestyle is absolutely do-able, but I strongly recommend you see a dietician to ensure you’re getting the nutrients you need to have a healthy diet and reach your goals. If you’re going vegan because of your own personal values, then you will find it much easier to stick to than going vegan because you think it’ll be good for your health, simply because you’ll likely have a much stronger motivation to make it work.

You also need to be prepared to have the time to put into planning and prepping food, keeping in mind that there may not be many vegan-friendly options in your day-to-day life.

Personally, for me I think being vegetarian would be much more sustainable, particularly considering how much training I do and my own values.

So that’s the roadtest! One more to go this year … until then, I’m easing back into eating more dairy and eggs, and we’ll see if I can get to eating fish or chicken again. Thanks for coming along for the ride!