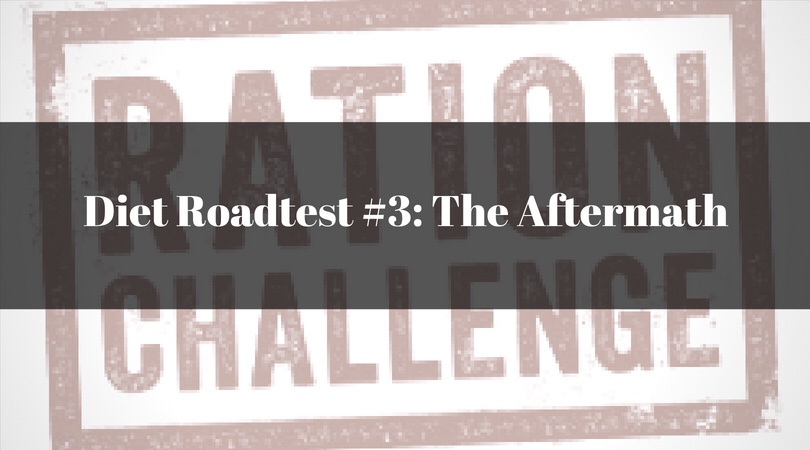 During this roadtest I undertook the Act for Peace Ration Challenge to raise awareness of – and money for – refugees the world over, but particularly Syrian refugees. There’s currently 90,000 Syrian refugees in the camp in Jordan – 90,000! That’s a small city!

The challenge involved eating the same amount and type of food a Syrian refugee in one of these camps would typically get to eat. It basically involved eating a lot of rice with a few lentils and chickpeas, a few canned beans, and that’s about it. It was around 1,700 calories a day – less than the recommended intake for any adult. Along the way you could ‘earn’ a few extras through fundraising.

So what did I learn?

What’s the impact on the mind and body?

The effects of starvation

‘Starvation’ isn’t necessarily stopping eating altogether, it simply means you’re consuming fewer calories than what you need to survive. So what happens to your body when you starve?

To put it simply, when you eat your body produces glucose to give you energy. When you start to reduce your food intake, your body goes through your glucose stores, and then it starts to tap into fatty acids. But your brain needs glucose (about 120g a day!) so it’s going to work through those glucose stores until they’re completely depleted.

After fats, it’s on to protein – your body is going to start eating your own muscle. The brain will start to feed off protein as well for as long as there’s protein to feed from.

To help protect you and keep you alive as long as possible, your body will also slow your metabolism right down. So even though you’re starving, you slowly stop feeling as hungry.

Coming off the fasting diet isn’t that easy either. After a week of living on low calories, my body had started to adjust. I wasn’t feeling as hungry as often. So my first meals since have been small, but with much higher nutritional value. I could only get through half of what I would have prior to this challenge, and even with a proper breakfast Sunday morning my energy levels and capacity during class were way below what I know I’m usually capable of.

At the time of writing this, my appetite was edging back to normal, helped in part by some early morning exercise. The good part is – if there is one – is that I’ve managed to wean myself off sugar again, so hooray!

This certainly was an eye-opening challenge – not only about the effects of starvation on the human body and mind, but also on the fact that millions of people worldwide eat like this every day, every week, for often years upon end. We are so incredibly lucky to have access to good-quality, nutritious food, and yet we waste so much or make such poor choices every day when it comes to our nutrition. This isn’t about having a poor relationship with food – it’s about improving our relationship with food by recognising the good it does for our body when it’s nutritious, high quality, and when it’s enough to enable us to go to bed every night with a fully belly.

From now on I’m going to be much more grateful for the access I have to food and try much harder to minimise waste. It’s not just Syrian refugees going hungry – children and adults in Australia go hungry every night. If you’re not compelled yet to donate to a food aid charity for refugees, you may want to consider donating to a service like FoodBank Australia, which works with local businesses to distribute left-over quality food and food donations to families in need.

It’s not too late to donate!

Donations are still being accepted until 30 June, so if you feel so inclined, please make a donation here.