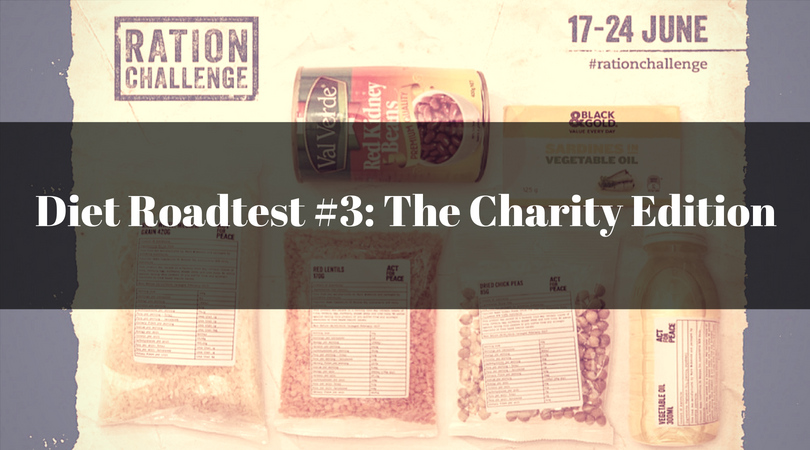 It’s been a while since I’ve been able to post a blog courtesy of a book launch and uni assessment, but now the dust has settled it’s given me time to catch up on a few things – including blogging and diet roadtests!

My third diet roadtest for the year is a ‘charity edition’ – I’m undertaking the Act for Peace Ration Challenge. As part of the challenge you’re issued with a ration pack that has the same amount and type of food a Syrian refugee gets every week in a refugee camp.

And let me tell you, it’s not much! In fact, it’s about only 1,700 calories a day, which is well below health standards for adults the world over.

So what do I get in my ration pack?

And that’s it. It’s starchy, it’s boring, and it’s simply not enough food for an average human adult to live off.

So it’s also very humbling. I’m only doing this for a week and I’ve been miserable – hunger pains, headaches, lethargy, and dehydration. I also had the realisation of how lucky I am to just go and get something to eat if I feel hungry. You can’t do that if you’re on rations – you need to make this food last a week so you need to think ahead to save the food for the next meal.

It’s also painfully obvious that I am NOT designed to cook lentils (disaster) or flatbreads made on coconut flour (turns out that doesn’t work) and really this challenge is as much about my cooking skills as going hungry.

If you follow me on Instagram (@heymel.fitness) then you will have seen some of what I’ve been cooking/eating so far this week. To date, it’s mostly involved:

Over the coming days I’ll be using the tin of beans to make some rice and beans meals, and some felafel from the dried chickpeas. And then I’ll be pretty much out of rations.

The good part is that you can earn rewards through fundraising, so to date I’ve been able to earn a spice, a vegetable, more protein, milk, sugar, two teabags, and an item worth up to $5 (I bought a box of tea – yay!).  Also if you do happen to cheat or slip up, you need to pay a penalty of $50 … so this morning I paid for a banana (the world’s most expensive banana ever) so I could have some ‘brain food’ for my exam!

As you can imagine, with the amount of classes and training I do, I have a pretty fast metabolism and consume a lot of calories on a daily basis, so consuming so little has been a CONSTANT struggle. As soon as I eat my ration meal, I’m hungry again. But the lethargy is starting to impact my training. I got through teaching my cycle class this morning but it was nowhere near the intensity I’d normally be capable of, and I felt physically ill afterward.

I’m also really missing my post-workout protein – I’m realising how much it helps with my recovery. Oh and I’m REALLY missing my pre-workout – I need caffeine!

But every time I think about complaining, I’m reminded I’m only doing this for a week and there’s a light at the end of the tunnel for me. For the refugees, that’s not always the case.

So I shall persevere! I have three days to go, then on Sunday I plan to have an AMAZING breakfast and probably a post-class brunch.

If you should feel so inclined to make a donation, you can do so here. The challenge finishes Sunday but I’m sure I can keep taking donations for a wee while afterwards.

(Courtesy of Act for Peace)